All The Stars and Teeth by Adalyn Grace (373 Pages)

A Thrilling Adventure Filled With Pirates, Mermaids, and Sinister Magic
Home  |  Blog   |  All The Stars and Teeth by Adalyn Grace (373 Pages)

All The Stars and Teeth by Adalyn Grace (373 Pages)

In All The Stars and Teeth, a Fiery Princess Flees her Home Island with a Mysterious Pirate to Save her Kingdom

In a realm of magical islands where people can choose what magic they practice, Princess Amora of Visidia has no choice but to prove her ability to wield the dangerous soul magic. But Amora doesn’t see this as a punishment, seeing as she comes from a long line of Montaras who practice soul magic to establish their place on the throne. It is an honour and privilege to be the only family who controls soul magic, and Amora has been training her whole life to be the master of souls.

But when it comes time to claim her status as High Animancer, a demonstration of her powers goes wrong, and her own family imprisons her. In order to escape, Amora strikes a deal with the mysterious pirate, Bastian, who needs Amora to help him reclaim his stolen magic.

As they set sail on Bastian’s incredible ship, Amora learns that her seemingly perfect island kingdom is in danger of a darker magic on the rise. Not only is her kingdom in peril, but surprising revelations of her family’s heroic history also come to light, and Amora begins to question everything she’s ever known. 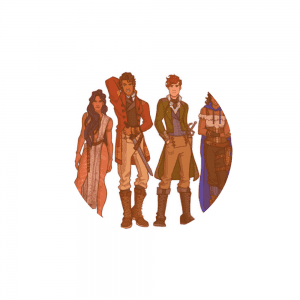 Full of Magic and Action, It’s Everything You’re Looking For in a Fantasy

All The Stars and Teeth is a fun, fresh, and exciting sea adventure that doesn’t hold back from the dark and twisty elements. Adalyn Grace isn’t afraid to use vivid descriptions of blood and gore to balance out the beautiful illustrations of this island kingdom where most would long to be. This story is a perfect representation that no matter how beautiful something might be, there’s always something sinister lurking in the shadows.

Grace’s characters are fun, flawed, and they give this story the emotional depth it needs. We follow Amora, Bastian, Ferrick, and Vatea on this perilous sea journey as they face secrets, curses, and sea monsters, all while honing their magic to save their magical land.

Amora’s fiery spirit and devotion to her kingdom are what keeps her going and instills her trust in Bastian. Bastian provides a lot of entertainment to this story with his witty charm and mysterious nature that would have readers wondering what kind of dark secrets he’s harbouring. Grace creates the type of characters that you root for throughout their secrets and flaws, and leaves you needing that happy ending for them.

The magic system in this story is new, exciting, and unlike anything I’ve seen before! Each island in the kingdom of Visidia practices its own magic. There’s an island that wields elemental magic, one that wields mind magic, and so on.

When you’re reading about islands that practice not only elemental and mind magic, but also enchantment, time, restoration, and curse magic, you’re finishing the book wondering what type of magic you would choose to wield! The decision is ultimately impossible, making it difficult to live under Visidia’s rule that you must only practice one magic, or the consequences will be dire.

All The Stars and Teeth is just the new type of fantasy book we need. Fantasy is exponentially more entertaining when authors aren’t afraid to include darker components that add a threatening twist, and that’s exactly what Adalyn Grace does.

Aside from a few parts where the pacing seemed a bit slow, this book kept me enthralled and excited to see what happens next. With captivating characters who aren’t afraid to blur that line between good and evil, we get an intoxicating story that leaves us needing the second book as soon as possible!