From friendships to love to identity, these books will get - and keep - you talking
Home  |  Best Of The Journal   |  Top Five Books for a Great Book Club Discussion

Set a date, pick a place, and let’s talk!

We are less than a month away from the official start of summer, and I am beyond excited – not just about the books that have graced bookstore shelves and made bestseller lists, but with the CDC’s new guidelines and the fact that many of us have been vaccinated, it feels like this fog that we’ve been in for the past 14 months is lifting. The birds are singing. The sun is shining. More people are out and about, taking walks at the park, going on runs, shopping, and more. Perhaps, like me, they’re dying to see friends and family again, to be close enough to touch someone’s hand, to hug them, to ask “How have you been?” and to have a conversation that’s not separated by a computer screen.

That said, one of the silver linings for me during the pandemic was the time it allowed for me to read more books. Tucked inside my hoodies and afghans in the early morning, I read more than I normally would during a morning commute. And surprisingly, a number of books that I’ve chosen to read in the past year turned out to be stellar novels. Drawing on themes like love, loss, resilience, family, motherhood, women’s choices, and so forth, these books range from epic family sagas to graphic illustrations that continue to resonate with me to this day; novels that are full of nuance and complexity.

Here at BooknBrunch, we connect readers and book lovers with like-minded people for a great conversation and friendship. Sign up to become a Brookie Host and we’ll give you all the tools you need. Start with one of the carefully selected books below – you won’t be disappointed! 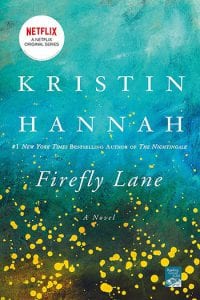 I decided to pick up Firefly Lane by Kristin Hannah after I finished watching its Netflix adaptation, and I have to say – the book is better. It tells the story of Kate and Tully, two girls who meet in adolescence and become best friends while living on the same street – Firefly Lane. Through the years, the ups and downs of their careers and love lives(not to mention, their different personalities), Kate and Tully remain best friends until their early 40s, when a tragic event tears them apart. It’s not until Kate is hit with something so unexpected that the two begin the path towards repairing their friendship. Expect a lot of tears and sadness, but also a lot of joyful moments; ones that are very typical in female friendships. It’s not often that a friend from childhood remains your best friend in adulthood and is there for you until the end.

This is a great book for those looking to have discussions about true friendship, love, and the importance of taking care of one’s health.

2. Good Talk: A Memoir in Conversations by Mira Jacob (364 pages) 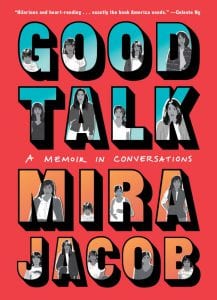 In the acknowledgments section of Good Talk, Mira Jacob credits her husband, Jed, for his wisdom. “Just write the truth, and we’ll go from there,” he had told her. That’s exactly what she did. From her sexuality to racism to dating, Jacob leaves nothing out. This book is a collection of illustrations and candid conversations that begin when her son (who was six years old at the time) becomes obsessed with Michael Jackson and starts asking her questions about race, which leads to more conversations about race, identity, and politics.

Growing up in Albuquerque, New Mexico as one of the only seven Indian kids at school, Jacob had never given much thought to race or what it means to be an Indian. Her husband is Jewish and her son is mixed race. His curiosity inspired her to look back on her childhood, to her parents’ marriage, to the ideals they possessed while searching for answers, both for her son and for herself.

A must-read if you’re looking to have a frank discussion about race, identity, and politics. 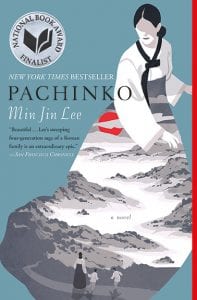 Described by NPR and other outlets as an “epic family saga,” Pachinko tells the story of four generations of a Korean family living in Japan. Pachinko begins in the early 20th century with Sunja, the only surviving daughter of a poor family in a fishing village in Korea who gets pregnant out of wedlock. To save her from shame and disgrace, a Japanese man living in a boarding house that her family operated, agrees to marry her and take back to Japan. She goes with him and begins a new life there. As the story progresses, we learn about her relationship with the man, her sons, the generations that follow, and what happens to them.

This book is more than a multigenerational family story; it’s also a story about exile, discrimination, mental illness, poverty and about upward mobility, and belonging. Told through many lenses and characters, the author, Min Jin Lee, a Korean American, did a fantastic job with the characters, the plot, and their experiences.

This is a great book if you want to learn more about other cultures (especially Asian cultures) or if you’re interested in issues related to race, class and social justice. 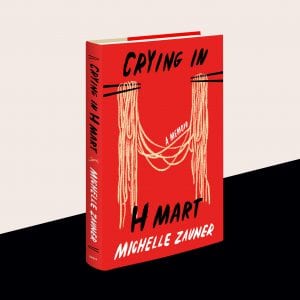 I hadn’t heard of Michelle Zauner until I read her essay of the same title in the New Yorker, published in 2018. Crying in H Mart is an extension of that essay. It’s a book about food, grief, loss, and love. Zauner, who is the lead singer in the band Japanese Breakfast, chronicles her experience as her mother’s caretaker after she was diagnosed with pancreatic cancer in 2014, and their relationship, severed during her teenage years but rekindled later in life through a shared love of Korean food. Its delectable descriptions of the foods that she prepared and ate with her mom during their time together makes the story a cohesive, worthwhile read. However, this book is not all doom and gloom. I liked the fact that Zauner also wove in happier moments, from her summer trips to Korea to visit her mother’s family to growing up in Eugene, Oregon as a mixed-race kid to getting married at her parents’ homestead.

Similar to Mira Jacob’s book, this book serves as a great segue into honest conversations about race, identity, and family. It’s a story about complicated mother-daughter relationships, finding solace where you can, and a reminder that we don’t always know what we’re missing until it’s gone from our lives. 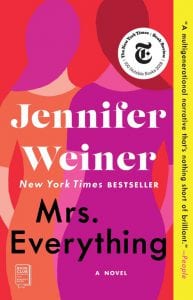 Never have I read a book with scenes that give me the chills every time I think about them. Mrs. Everything by Jennifer Weiner does it for me. It tells the story of Jo and Beth, two sisters who grow up in the 1950s in the midwest. They’re about as normal as any pair of sisters can be, except Jo has a secret that she has kept for most of her life, a secret that impacts so many of her choices as a woman, while Beth also grapples with her own inner demons. Their relationship fluctuates as they go through life, but their strong bond can’t keep them apart. The ending, I would say, is sad and bittersweet.

When I think about the story of Jo and Beth, two sisters who couldn’t be greater opposites, and the choices they had to make, I’m so glad about how far we’ve come. There is still a glass ceiling and double standards, and while we don’t have universal childcare or paid maternity leave, we are making progress. As a woman, I’m aware of how many more choices I have in comparison to my mom’s generation.

Weiner is known for writing novels with strong female characters and this one does not disappoint.

What books do you think would make for a great book club discussion? Let us know here!

Better yet, become a Brookie Host and connect with others for a great conversation and meet new people from all corners of the world! Sign up here to become a host.

Hoang Samuelson
Hoang Samuelson is a writer, editor, and lover of British dramas, including Call the Midwife, Downton Abbey and The Great British Baking Show. When she’s not reading or baking or watching one of the shows above, she enjoys outdoor activities including running and hiking. She also works as an accountant by day. Currently, she lives in Portland, Oregon with her husband and to children, ages five and eight.
Favorite book: Too many to count, but a recent one is The Library Book by Susan Orlean
Favorite brunch item: chicken and waffles! with a side of coffee

YA Series Round Up