A Book Written for All to Think Critically and Question Everything
Home  |  Blog   |  Curtis Carmichael, Author of Butterflies in the Trenches

Deep Conversation with Curtis Carmichael, Author of Butterflies in the Trenches

Who is Curtis Carmichael?

I met Curtis in 2010. I was in grade 10, he was in grade 11. A teacher pulled us together to brainstorm what forming a social justice club could look like. I knew, even then, that Curtis was going to make a huge impact on the world. He already had. In high school, Curtis was everyone’s friend. His intelligence, charisma, athleticism, and positivity, along with his dazzling smile, could light up the room and improve someone’s mood in an instant. Growing up, life wasn’t easy for Curtis. He overcame countless hardships and traumas that no one should ever have to experience.

Failing in school but “successful” in crime, Curtis Carmichael grew up in a Scarborough neighbourhood—plagued by poverty, trap houses, attending underfunded schools, and avoiding drive-by shootings—and found a way to break the cycle he was born into. Carmichael combines memoir and multimedia storytelling to share his life story from a childhood drug dealer to Team Canada Duathlete and his triumph of Cycling across Canada in his memoir Butterflies in the Trenches—the world’s first augmented reality memoir.

Was being an author always the dream for you?

I never dreamed of being a YA author. I had never seen anyone who looked like me reflected in the text I read provided by colonial institutions, like the public education system. I had no blueprint or inspiration to know that was a possibility. I only saw books by white authors and people who came from life experiences I never had.

Throughout my life, I searched everywhere for a book that focused on dismantling and abolishing colonial systems and systemic racism, that was about people from the ‘hood who were breaking the cycle of poverty and equipping young people to do the same. Even when I became a STEM elementary school teacher, I had no luck. I continued to see books that further marginalized Black, brown, and Indigenous communities living in poverty.

When I left teaching, I became a keynote speaker and social entrepreneur, which is when I came across these beautiful words of Toni Morrison, “If there’s a book that you want to read, but it hasn’t been written yet, then you must write it”. My life changed with those words. They became the compass I followed to finally find the book I’d been searching for, by writing it myself.

Tell us a bit about your incredible book, Butterflies in the Trenches, and how you came up with that name. How does it relate to your community?

Written through a lens of anti-racism and anti-oppression, Butterflies in the Trenches is a memoir about breaking the cycle of poverty and equipping young people to do the same. To make the book innovative and multimedia, I built a mobile app myself that scans photos throughout the book and displays interactive audio and visual experiences right on your screen. This is why my book is referred to as “The World’s First Augmented Reality Memoir”.

For young people, my memoir is a blueprint to breaking the cycle of poverty and preparing for the future of work. For teachers and community leaders, it is a guide to teaching in low-income communities and communities that are marginalized due to systemic racism and generational poverty. For adults and other readers, it is a call to action and a guide on how to make a difference and do your part in dismantling and abolishing colonial systems and systemic racism that further marginalizes Black, Indigenous, and low-income communities in Toronto, Canada, and globally.

As for the title, Biomimicry is what led me down the journey to figure out what to title my memoir. By definition, biomimicry is a process of using nature as an inspiration to solve problems in a regenerative way.

Using butterflies as an inspiration for my artistic craft

Comparing butterflies and the mud to my community

I believe, without a doubt, that the most innovative place on the planet is the ‘hood’ (low-income and communities living in poverty), both locally and globally. I also know that in the midst of living in poverty with all that goes on it sometimes feels like a warzone living amongst drugs, violence, police brutality, underfunded schools and community programs, lack of affordable housing, and systemic racism that impacts every part of our lives from healthcare, housing, education, employment, homelessness, crowded apartments, access to healthy food, criminal justice system and more. When I combined both the most innovative and beautiful place in the world with a place that also feels like a warzone, that’s when the title Butterflies in the Trenches popped in my head. Shout out to Kass Marling, my wife, who created space to brainstorm, plan, and soundboard ideas with me to land on the final title.

Were there any highlights for you during this entire book publishing process?

There are two highlights I’d like to share. The first is having Michael “Pinball” Clemons write the foreword for the book. For those who do not know, he’s one of the most accomplished athletes in Canadian Football League (CFL) history and the first African American to coach in the Grey Cup. Clemons moved into an executive role in The Toronto Argonauts’ front office after retiring from coaching. He is involved with a number of charities, including the Pinball Clemons Foundation. In recognition of his work, Clemons received the Queen Elizabeth II Diamond Jubilee Medal and is a member of the Order of Ontario.

The second highlight is the advanced praise from impactful bestselling authors such as Jesse Thistle, Clara Hughes, William Kamkwamba, Celina Caesar-Chavannes, and Catherine Hernandez. Having their praise meant the world to me. It confirmed that this book was bigger than me and will make waves and ripples of change to the social and economic fabric of disenfranchised communities more than my team anticipated. I also received an incredible review from Kirkus Reviews, which I was not expecting!

I cycled across Canada for two reasons:

1) to raise $100,000 in 60 days for children and youth after school programs across the city of Toronto in low-income neighbourhoods that lost funding.

2) to speak on systemic racism and structural marginalization of Black, Indigenous, and racialized children, youth, and families living in low-income communities in Toronto and Canada and the importance of dismantling and abolishing colonial systems. It was a life-changing experience and I am glad it was covered in an award-winning documentary by filmmaker, Sherien Barsoum, titled Ride For Promise. If it wasn’t filmed, I am not sure if I would remember anything about the trip because I had zero sleep, my body was in physical pain, and my mental health was tested the entire journey across the country. It was an amazing experience, but sometimes you only need to do things once.

What’s the best advice you’ve ever been given?

How do you handle failure?

My motto: You either win or you learn. I don’t consider anything a failure.

Where do you write? What is the setting?

I do not have one place to write. Wherever there was a floor or a chair, that was my workstation. Most of my book was written on the living room floor, the park at night when I had my headlight on, the street corner, the washroom (the only quiet room in my apartment full of family members), my hammock during the day, and travelling on the train or bus to and from home. If I am being honest, most of this book was written on my phone. Whenever I got any creative inspiration I started to write on whatever device was easiest to pull out of my backpack. Living in Toronto, it is a lot harder to type on a laptop while standing chest to chest with someone on the bus so the smartphone was a gift from heaven.

What exciting projects do you have coming up?

After my book launch and well-needed time off, I will be building the foundation for Source Code Academy Canada. Source Code Academy will be Canada’s 1st culture-focused innovation and entrepreneurship academy that prepares Black, Indigenous, low-income, and underserved youth for the future of work. As a Scarborough-based and globally-focused human accelerator and education academy, we develop children 4-18 through design thinking and equitable and culturally relevant education. Our academy will be a community-based and youth-led space with key focus areas on STEAM education, entrepreneurship, and financial literacy with a foundational focus on mental health, creative arts, literacy, and emotional intelligence.

What is your ideal comfort food?

Fried Plantain, mangoes, grilled cheese (from Hotblack Coffee Shop, Midtown Toronto) and Zesty Ranch Veggie Sticks. Not all at once, of course. One at a time.

Which authors inspire your work the most?

Watkins, Kondwani Fidel, and Devin Allen are a select group of authors that inspire me the most. They are all close friends from the same city in Baltimore. The beauty of the brotherhood they have is that they also come from the ‘hood and grew up in a low-income, predominantly Black neighbourhood that they all still support, live in, and are all doing their part to raise the social and economic fabric of their neighbourhoods. To top it all off, they are published photographers, poets, and best-selling authors of  multiple books. All their books are required reading.

Sister Souljah is my biggest compass and OG inspiration that gave me a love for reading and imagining new worlds as a writer. Her book, The Coldest Winter Ever, literally changed the direction of my life and empowered me to pick up the pen, not to just write, but to visualize myself as painting a masterpiece on a beautiful canvas each time I work on my craft.

Nipsey Hussle is my number one inspiration in life. He is not an author, per se, but as a musician and hip-hop artist, he was the best storyteller that painted vivid pictures of his community, never done before with each musical bar he wrote. In the mainstream world, typically the best storytellers were authors but for me, you do not have to be an author in the traditional sense to be a gifted and amazing storyteller. For those who don’t know who Nipsey is, The Marathon Don’t Stop by Rob Kenner will open your eyes to a world you have never seen before. He single-handedly elevated the social and economic fabric of his disenfranchised community in South Central Los Angeles through his focus on social entrepreneurship and financial literacy and became the world’s blueprint of how to lead a movement that is for, by, and owned by the community. The world of Nipsey’s life is what gave me the courage and heart to write unapologetically as I was following his journey while he was alive before his tragic passing. In his eyes, being Black and excellent was interconnected and were not two separate realities. In his words: the marathon continues.

Finally, where can we purchase your book?

The book is only available on www.curtiscarmichael.ca

Grab a copy of Butterflies in the Trenches and explore what it’s like to both read and participate in augmented reality at the same time. This story of hope is going to make waves of change for so many lives. 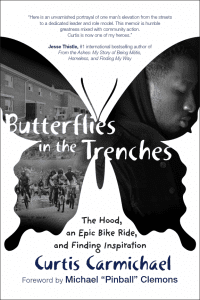 Let us know your thoughts on Butterflies in the Trenches by DMing us on our socials @booknbrunch!

Rachael Wallace
Rachael Wallace is a homebody who always has at least one book on the go and prefers experiences over material items. She is passionate about always seeing the gifts, strengths and contributions of those around her, especially those with developmental/intellectual disabilities. Rachael is always striving for personal growth and implementing daily self-care practices into her life that align with her needs.