Aiza has always dreamed of becoming a squire, the first step toward knighthood. Joining the army would mean she could obtain citizenship to the once great Bait-Sajji empire. As a member of the Ornu tribe, life is not always easy for her people who have long been looked down on as second class citizens. Becoming a squire and joining the knighthood would allow for some stability in her life. After convincing her parents to let her enlist, Aiza goes to training and embarks on the journey that will get her closer to her dream.

The reality of her new situation is not as she imagined. She undergoes rigorous training under the stern General Hende, struggles to succeed in courses, all the while hiding her identity as an Ornu. She finds solace in an unexpected friend, and learns that they are in a manipulative, endless cycle of war. Her fellow recruits might be in greater danger than she imagined. She has to make a decision – remain loyal to her family and heritage, or maintain loyalty to an empire that she always yearned to serve? 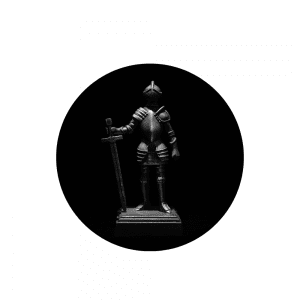 A Graphic Novel that Packs Punch

A graphic novel is a unique reading experience, with new elements requiring your attention in addition to the text. On one hand, it may feel like your imagination is piggybacking on the illustrator’s drawings, and on the other it really helped solidify the visual aspects of storytelling. I knew exactly how to imagine the expressions on the characters’ faces as I could clearly see what they looked like. The choice of colours used by the illustrator is what I enjoyed the most. It brought out the true essence of the desert and the overall setting in what looks to be Petra, the famous archaeological site in the southwestern desert of Jordan. The text panels were easy to follow, and it was delightful to see Arabic words scattered throughout- a reflection of the cultural heritage of both authors Sara Alfageeh and Nadia Shammas.

It is a beautiful thing when real cultures are woven into the fabric of a fictional story, and seeing elements of Arabic and Middle Eastern culture in this graphic novel was a high point for me. I was not crazy about the ending as it felt rushed and slightly anticlimactic. While this is marked as a young adult book, I would argue that it works well for upper middle grade readers as well. This book would make a great series, so here’s to hoping that Alfageeh and Shammas collaborate again in the future!

Which graphic novel should we review next?  Let us know by emailing us or send us a DM @booknbrunch.

Books That Will Get Everyone Reading on Read Across America Day