No One Is Too Small to Make a Difference contains the powerful speeches of one, Greta Thunberg, a then fifteen-year-old Swedish girl who sparked a movement against the climate crisis. Thunberg is known for school-striking climate change one day outside the Swedish Parliament, inspiring young people all over the world to protest the climate crisis. In her own words, we learn what Thunberg said in her memorable meetings with organizations like the United Nations and the United States Congress to persuade people in power to help be the change the planet needs. Thunberg, having Aspergers, considers it a gift because it helped her see the climate crisis in “black and white” which is a common theme in her speeches. Greta Thunberg’s mission to wake up the world and open everyone’s eyes to the crisis the planet is in has made an impact across the nations. 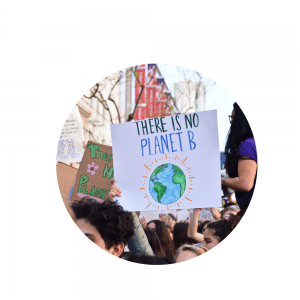 Greta Thunberg’s impactful speeches about the climate crisis and the role we all play can truly open anyone’s eyes to the kind of situation we’re in. And there’s no better book to spend Earth Day with because Thunberg breaks down what we have to do, as well as what politicians have to do in order to reverse the climate crisis. The young Swedish girl doesn’t shy away from the situation the planet is truly in and she wears a face of bravery at every meeting she attends. Thunberg simply states “This is not a political text. Our school strike has nothing to do with part politics. Because the climate and the biosphere don’t care about our politics for a single second.” She emphasizes that this is something that is bigger than all of us and arguing over the matter isn’t going to make a change, in fact, it’s going to prolong the process. Thunberg is an advocate for action and that is what she is trying to persuade politicians in her speeches.

Greta Thunberg’s powerful messages contain the fact that the world can’t sit in silence anymore. If we want to reverse the crisis, the world only has limited time to do so. She states that “According to the IPCC, we are less than 12 years away from not being able to undo our mistakes.” But Thunberg also emphasizes that it’s not too late to take action and change the course of action. She makes sure to reiterate that we have the facts and solutions; we just need to actually act on those solutions.

No One Is Too Small to Make a Difference highlights the powerful speeches of Greta Thunberg and her moving presence that sparked a nation of change. Thunberg was named TIME’s Person of the Year in 2019 due to her candour and bravery igniting millions of students to go on strike for the planet. What better way to spend Earth Day than by learning about what a young girl does to help protect our very planet. These speeches will inspire anyone to understand that they are capable of change.

How You Can Help Make Every Day Earth Day